They Can Feed Off Your Home

Termites, are wood-destroying insects that cause many millions of dollars of damage annually. Both subterranean termites can potentially cause costly damage to your property and in some cases even make the floors or foundations unsafe.

Unfortunately termites often go unnoticed until the colony is sending out swarmers* or even worse, has caused extreme damage to an infested structure, which can include buckling wood, swollen ceilings or floors, or areas that appear to be suffering from water damage.

It is your best advantage to have a regular termite inspection in order to control termites before they cause damages to your home or business which require expensive and disruptive repairs. 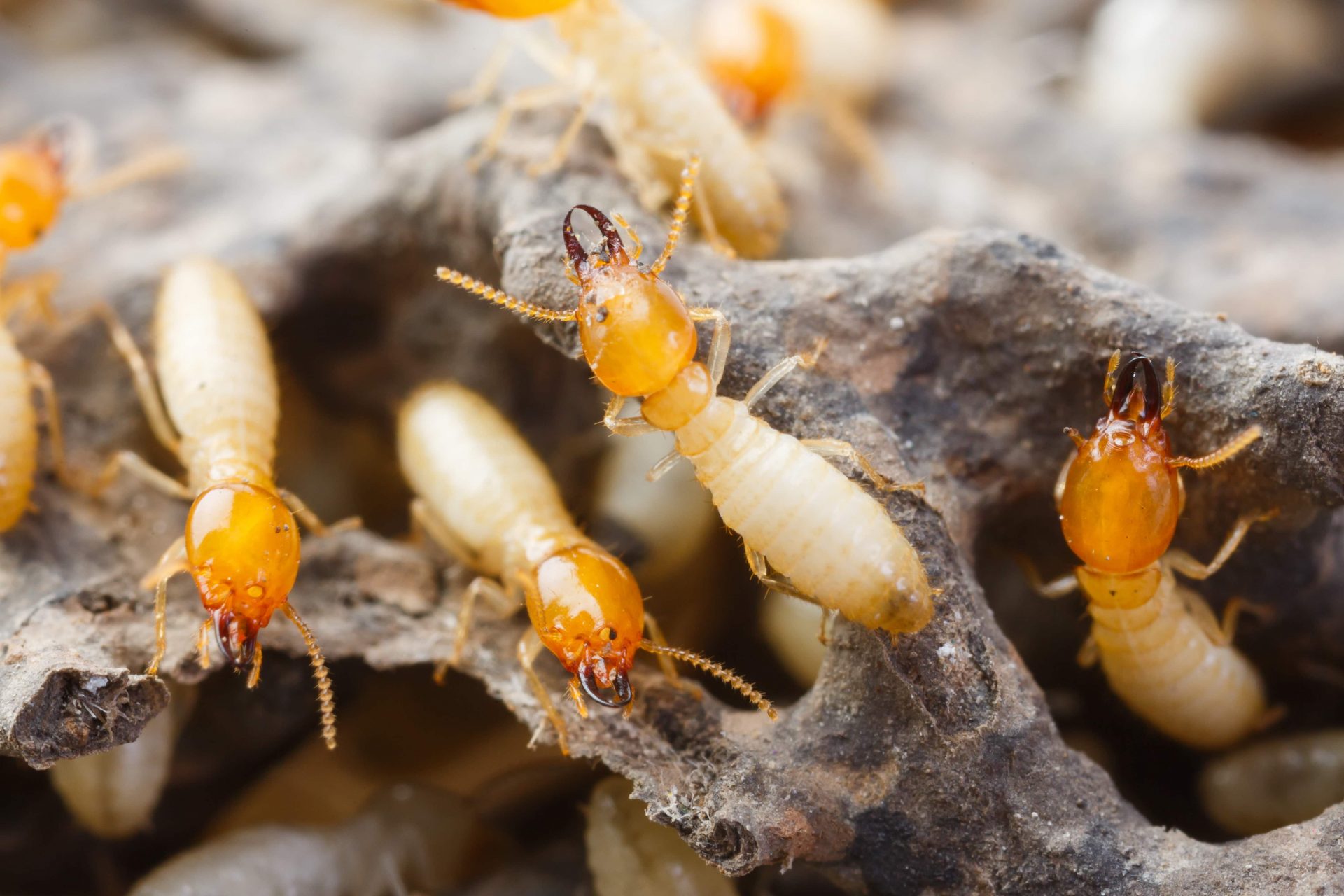 Termites, sometimes thought to be white ants or flying ants, are a wood destroying pest in all of the Sunbelt states of the United States. San Diego, having a microclimate is prime termite territory.

There are four main termites found in San Diego, listed in order of prevalence:

Drywood termites are the most commonly found termite in San Diego. This is because of the wealth of lush landscaping and track homes found here. But they are most common in the beach cities like La Jolla, Carlsbad, Pacific Beach, and Del Mar, -pretty much anywhere along San Diego’s Coastal Regions. Drywood termites are an “aerial” type termite, meaning they are always found in wood or cellulose type products. Most commonly found in attics, garages, patios, and eaves.

Have you ever noticed any pebbles of “sand” or little “wood balls” around your home? Maybe you have noticed a large number of winged ants around your windows, doors, and light fixtures. They are a sure sign you have or had Drywood termites. Termites cause damage to the wood in and around your home. Most people run across this when they are out painting, hanging Christmas lights, or just working around the house, you might find strange wood damage that at first look, you may think it’s just damage from water or peeling paint. Termites swarm in early spring and late summer, with late summer being the worst. These are the times you will see them flying, sometimes you may come home and find hundreds of these “flying ants” inside your home. This is usually proof positive you are infested with Drywood termites.

Subterranean Termites
Subterranean termites are also found in the same micro-climates the Drywood termites and with the addition that they are also very hearty in the more extreme conditions of our deserts and mountains. This is due in part by the way they live. Unlike Drywood Termites, Subterranean live underground. They use the soil they live in to build mud tunnels, sometimes thought to be mud cocoons, mud tubes, or mud wasp nests. They bring their own moisture and can take refuge in your house or underground depending if they are seeking to warm up or cool down. They are more difficult to spot as they normally are good at building their tunnels in inconspicuous spots.

They become much more apparent during their swarming season which is early spring and sometimes before winter. You may find big mud castle like tubes coming from your walls, out of your windows, doors or cracks in concrete. When subterranean swarm they come out in the hundreds to thousands!

Formosan Termites
Formosan Termites are the least found termite but also the most destructive. They mimic both the Drywood and Subterranean termite evidence with the exception of aerial carton nests. It takes a very trained eye to tell the difference!

What should you do if you think you have Termites?
When the time is right Sage Exterminators trained and licensed Inspectors can do a Wood Destroying Organism’s report (WDO report or WDI) to let you know exactly what you are looking at for free! Contact us today!

101 Interesting Facts About The Insect Called Termite
There scientific name is Isoptera
The southern coast is home to drywood termites
They are commonly called the silent killers
There are four things that termites need to survive: food, moisture, shelter, and optimal temperature
They are detrivores, which feed on dead plants
The winged termites are attracted to light and are active in the spring
The queen termite can live decades but workers can only live for a few years (1-2)
Worker termites are white
Colonies are governed by a caste system
Soldier termites are pale yellow-brown
Termites are referred to as white ants but are not closely related
There are over 2,750 species known
Termites help convert plant cellulose into recycled substances
Only 10% of the termite species are reported as pests
They mostly feed on cellulose
They are related to cockroaches and in some studies, scientists have hypothesized that they are an evolved species of cockroaches
The reproductive termites are black and have wings
Drywood termites swarm in the summer
Termites differ from ants because they have four equal sized wings and straight antennae
Termite swarms are provoked by heavy rainfall and warm temperature
Termites are most abundant in tropical and subtropical territories
There are three major termite family groups: Rhinotermitidae-(subterranean) make contact with wood on the ground, Hodotermitidae-(rotten wood) live in moist wood, Kalotermitidae-(drywood/dampwood) nest in wood and Termitidae-largest group
They are most dominant in tropical rainforest
Some termite nests have up to 2000-4000 sq. ft. of area
Termites cannot digest wood fibers
The queen can lay up to 30,000 eggs a day
The adult reproductive termites are not usually to blame for damage
Termite larvae hatch in a few weeks
Termites molt 5 times before adulthood
Termites shed their wings after they find a good place to nest, then they mate
Termites cause $2 billion in damages each year
Termites are social insects , meaning they raise their young in groups
Both sexes of termite can reproduce
Termites are non-monogamous, there are multiple reproducing termites other than the queen
Only winged termites develop eyes and eyesight, the others are blind
Termites are poor fliers
The workers are in charge of digesting cellulose and feeding the colony
Termitidae account for 60% of all species
Termites use trophallaxis, which is the process of feeding of one colony member by another
Soldier termites have enlarged jaws and are incapable of feeding themselves
Soldiers exude noxious gases to ward off predators
Soldiers use their heads to block the entrance to the colony
Soldiers have been known to commit suicide to protect the colony
Dimorphic soldiers have been found to protect the inside tunnels
Some colonies maintain a fungal garden in their nest
Their nests are always air-conditioned and temperature is controlled
Termites need moisture to survive
Termites cover their tracks with feces, plant matter, saliva, and soil
Termites have been known to eat paper, cloth, and carpeting
Most cultures eat termites for their nutrition
Termites are high in oil and fat proteins
Termites have a nutty taste
The US is looking in to using termites as a renewable resource
Termites produce 2 liters of hydrogen from one piece of paper
One of the planets most efficient bioreactors is the termite
Termites clear away plant litter and reduce wildfire hazards
Termites produce high levels of methane
Plant growth has developed a balance between feeding termites
Some termites have dated back to the Cretaceous period
Traces of termites have been found in dinosaur bones
Larvae is feed poop so it can develop important bacteria to break down food
Soldier termites bang their heads together to signify a threat
Termites use pheromones to communicate
Termites build the largest nests out of all insects
Ants are the termites main predator
Termites cannot cause injury to people
Most termite nests are not visible
Plant have been known to develop termite repellent
Termites repel Eremophila species
Termites never stop eating
They have been known to eat pool filtration and liners
Termites build mud tubes to connect their nest to wood
Tree stumps are a perfect candidates for termites
Most home kits are not effective in killing termites
For every human there is 1000 lbs. of termites
Termites never sleep
Mounds have been found in Africa that reached 30 ft. tall
Termites only have an abdomen and a head
Alaska does not contain termites
Termites cannot spread disease
Some zoos have termites on exhibit
10% of the worlds biomass is termites
Damage from termites can take 3-8 years to show
Termites speed up natural deterioration
Some queens can grow up to 5in. long
Workers can find food up to 250 ft away from the colony
There are 40 species of termites in the US
Termites release 150 million tons of methane per year
Dampwood termites are typically larger than other species
Dampwood colonies don’t have worker termites
Dampwood termites don’t cause harm to housing
Drywood termites don’t require moisture or contact with soil
Subterranean termites harbor up to 2 million members
Subterranean termites need contact with soil to survive
Termites WILL enter pressure treated wood
Termites don’t like light (unless they are winged)
Termites have been used to produce didgeridoos
Alates are future queens/ kings
Some termites eat animal carcasses
Termidor has shown to work excellent against termite attack
Bugs do not like the Sage plant… Bugs Hate Sage!

Choose a Service or Plan

GET A FREE INSPECTION TODAY

GET A FREE INSPECTION TODAY

Thank you for taking the time to request a phone call someone will be in touch with you soon!

You do not need a PayPal account to pay your bill. Please wait after you press the “Pay Bill” button as our website is securely communicating with PayPal. We really appreciate your business and patience! Thank you!